The Elite Pelleter was a boss that was added on a unknown release date.

Same as an Elite Crasher

Same as an Elite Crasher

The Elite Pelleter has low firepower and Pelleter turrets fire weak but are fired at a very high rate, so it could deal rapid damage and then eventually kill you. It's Machine Gun turrets are strong, but have lots of spread and high reload.

Currently does not spawn

To counter this boss, you will need at least 4 Hexa Builders to defend you and your team. Now you will need a/multiple Splitter(s) to attack the boss. And now you maybe need any fast-firing tank such as Machine Gun to make the bullets basically a shield, now you can slowly defeat this boss. 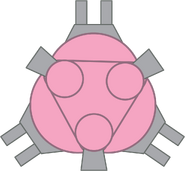