Known as a proficient sharpshooter...

The Elite Rifle is a boss that was added on the 21 of August in 2020 along with boss rush and the majority of the AWP-Tanks.

The Elite Rifle has a large size, medium speed, and medium health. Its rifles do not have much firepower, but they do have high speed and penetration. Combined, all bullets can penetrate the fire of focused bullet spammer. Swarm drones are also decent, although their damage is low, they can kill player still relatively fast.

The Elite Rifle may spawn randomly on boss rush. Also spawns rarely in other gamemodes.

Although this boss does not has much firepower, its bullet speed and penetration can kill you really quickly. Focused bullet spammers will penetrate its bullets, but swarm drones will likely kill you before you will be able to defeat the boss. Drones are not very useful, as they can only be used for self-defense. Tanks with high DPS, spread, and high RoF are ideal at killing this boss. The first way of defeating this boss would be using an appropriate tank. Splitter is ideal at killing this boss, as its DPS is enough to kill it before the boss will even hit you. As a tank with high DPS, you should move in a left-right pattern and shoot the boss. Also, make sure you have some Shield regeneration so that you can long survive the attack of swarm drones. As a Machine Gun branch user, you can even ignore most swarm drones, as the boss will take massive damage from all your bullets before even standing a chance to kill you. Any tank with high DPS or players with high DPS can kill this boss easily.

Another method of killing this boss is exploiting its large size and low health. Firstly, find a rock, and lure the boss near it. Next, try to oppose the boss on the other side of the rock. Now, when bullets cannot hit you, charge your drones into the boss if you are a drone user, or slowly kill it if you are an Octo Tank, as you will be able to protect yourself from swarm drones.

Elite Rifle with Hexablaster and Splitter in Boss Rush 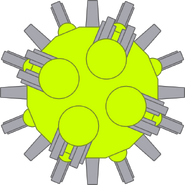