Elite Trapper is a boss that was added before the changelogs.

Elite Trapper has a pink triangle base with a large Constructor turret on top. On each edge of the base resides a small auto-turret. On both outside sides of the edge, a big trap launcher is located.

Elite Trapper shoots blocks that have high speed and damage but in return low health. They can kill a player from one hit, but get penetrated by some normal bullets.

Auto-turrets of Elite Trapper are weak, and can barely kill a player. They are not a big threat and do not impact the overall boss's strength.

Traps are the main weapon of the boss. They have high health and damage, and there are 6 trap spawners. Each trap may require a line of bullets to penetrate, by which time new traps will already be spawned.

Drones and minions, especially drones, can effectively deal with the boss. Minions should be rammed into the boss, so they will be similar to drones in battle with the boss. You will be easily able to penetrate the traps, so only blocks and bullets remain.

Bullets are pretty weak and can be avoided if tank has a high speed, though after some time they can deal decent damage to a slow tank. Try to upgrade movement speed when engaging in battle with the boss. Blocks are a large problem, but you can use a "hit-and-run" strategy. Gather some drones/minions, then quickly come closer to Elite Trapper and charge all your minions/drones in the boss. Boss will take heavy damage ( 1/5 of a health bar ). Retreat, and repeat until the boss is dead so that you will be out of range of blocks.

Elite Trapper locked on someone, with diep color theme, hence the color difference.

Incognito and an elite trapper.

Elite Trapper locked on a splitter in a maze 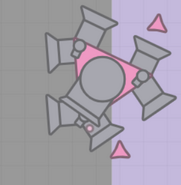 Elite Trapper locked on someone near a portal