The Equalizer is a Tier 3 tank that upgrades from the Single and the Basebrid at level 30.

The Equalizer has a circular body with an average-sized gun in front with a large, slanted base. It also has a regular-size drone spawner on its back.

The Equalizer has very average firepower similar to the Basic's, firing at an average pace and shooting regular bullets.

Like the Single, the Equalizer has the ability to extend its camera in the direction it's facing by holding secondary fire. The camera will stay in that position until secondary fire is released.

Its AI drone spawner spawns uncontrollable drones that automatically chase and attack nearby objects. It can spawn up to a maximum of three drones.

The Equalizer upgrades from the

The Equalizer cannot upgrade to any other tank.

The Equalizer was suggested by Dankツ and added to the game on August 22, 2018 with the name "Hybrid Single". It was later renamed to the Equalizer on January 28, 2019. 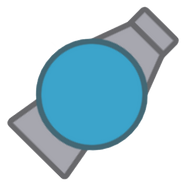 A high-res picture of the Equalizer.
Community content is available under CC-BY-SA unless otherwise noted.
Advertisement