Fallen Auto Tank has a gray circle base with four auto-turrets evenly spread around it.

The Fallen Auto Tank shoots strong bullets with high penetration and speed from its turrets. Only two auto-turrets can be locked on a single player. The Fallen Auto Tank moves at a low speed, and it does not auto spin, similarly to it’s tank counterpart, the Auto-Tank.

The Fallen Auto-Tank sparked the idea of Auto-tanks. It also gave some tanks the idea to have auto turrets that are like other tanks(The Juke Nuke’s Shrapnel turret) 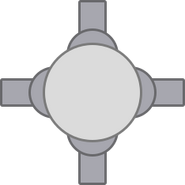 A Fallen Auto Tank named Galileo, an EK-2 named Alastor, and a Leviathan named Pewdiepie (who names a boss Pewdiepie?) on the leaderboard.
Community content is available under CC-BY-SA unless otherwise noted.
Advertisement