Fallen Fighter has a gray circular base and five barrels. One barrel points forward, two slightly weaker barrels point to the sides at 90 degrees angles to the front barrel, and two weak barrels positioned at 150 degrees from the front barrel.

Fallen Fighter has a medium speed, but deadly front bullets. Its rear cannons do not help it very much. However, despite its medium movement speed it still moves slightly faster than most tanks without movement speed. Its front bullets have high speed and are the main force of the boss, but in return, they have low health. Minions are not very effective, as bullets will pass through them, drones can only be used for defense. Traps may be effective and deal decent damage, but Fallen Fighter will get to you faster than your traps will kill it. 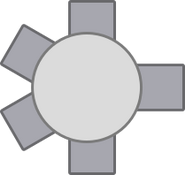 Fallen Figher locked on someone, spectated by VPN
Community content is available under CC-BY-SA unless otherwise noted.
Advertisement