Fallen Overlord is a boss that was added with the release of the game.

Fallen Overlord has a gray circular base with four Overlord drone launchers.

Fallen Overlord moves with a low speed, and has medium speed. It has many strong drones, which respawn at a pretty fast rate. Drones have high damage, penetration, low health and relatively mediocre speed.

The Fallen Bosses appear to be souls of the First tanks, which the Fallen Overlord is one of them.

The First Overlord died to a Guardian, and the soul became so corrupted that instead of retaining normal characteristics, it turned into a cross between Summoner and Overlord, but instead of Squares/Drones it spawned Crashers.

Fallen Overlord has medium health, and can be killed fast enough. The problem is its Crashers, which have strong penetration, health, and damage. Without these drone-lookalikes, Fallen Overlord is defenseless. These Crashers do have a weakness - they move with medium speed, and fast tanks can easily kill the Fallen Overlord.

Multiple players can kill Fallen Overlord very easily. One player will have to distract the crashers, as all the crashers will lock on only a single player. Then, another player can easily finish off Fallen Overlord, as it will be defenseless. 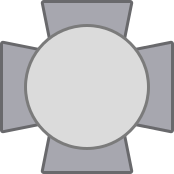