The Flank Swarm is a Tier 3 tank that branches from the Basebrid and the Flank Guard at level 30.

The Flank Swarm has a circular body and the normal Basic front barrel as well as a tiny trapezoidal barrel on its back.

Upgrading to the Flank Swarm gives you a controllable swarm barrel. This barrel constantly produces swarm drones with a limited lifetime (this can be increased with bullet health upgrades) that move and attack as your cursor directs them.

The Flank Swarm's front gun has comparable firepower to the Basic.

The Flank Swarm upgrades from the

The Flank Swarm branches to the following:

As the Flank Swarm

Against the Flank Swarm

The Flank Swarm was suggested by Fillygroove and added to the game on May 13, 2019. 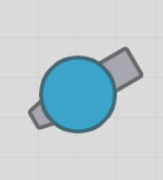 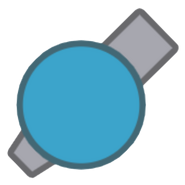 A high-res picture of the Flank Swarm.
Community content is available under CC-BY-SA unless otherwise noted.
Advertisement