The Foam Gun is a Tier 3 tank that upgrades from the Machine Gun at level 30.

The Foam Gun has a circular body and a small, trapezoidal gun.

Bubble Stats
(compared with the Basic)

x1
The Foam Gun fires its bullets at a slower pace than the Machine Gun but otherwise have similar gun stats.

After one second after being fired, the Foam Gun's bullets start spraying out tinier bullets in a forward arc. These bullets are very weak and deal only a small amount of damage. However, this, combined with the amount of bullets it fires, can cover a lot of area.

The Foam Gun upgrades from the

The Foam Gun can upgrade to the following:

As the Foam Gun

Against the Foam Gun 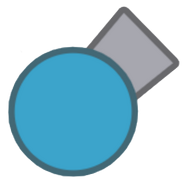 A high-res picture of the Foam Gun.
Community content is available under CC-BY-SA unless otherwise noted.
Advertisement