Gravibus Octanguli is a boss that was added on November 25, 2019.

Gravibus Octanguli always spins, has a medium speed, and lower health than most bosses. It's auto Octotank always spins with it and spreads the bullets just like Octotank would. It's auto turrets on sides shoot the closest player, but are not fully accurate.

Gravibus Octanguli's spawners spawns semi-crushers, slightly stronger than the normal version. They have higher health and damage, but the lower speed and behave like AI-controlled drones. They respawn at a pretty fast rate.

Gravibus Octanguli's main bullets as strong as they seem. They deal very decent damage, but Octotank turrets just shoot on all sides and only a small part of them will come by you. Auto-turret bullets are stronger, but they still have some spread, and any tank with a high rate of fire can easily penetrate them.

The main ammunition of Gravibus Octanguli is semi-crushers, as they come in numbers and attack from behind you. They respawn at a pretty quick rate and can be dangerous. Semi-crushers can almost always outflank focused fire tanks while dealing little, but steady damage to the tanks with some spread.

Auto-3 branch, bullet spammers with some spread, and Launcher branch are ideal at killing this boss. As an Auto-3 branch, you do not have much to do. Just move around, dodge the bullets, while your turrets will kill semi-crushers and deal damage to Gravibus Octanguli. As a bullet spammer, you would like to deal some damage to Gravibus Octanguli, and when there will be many semi-crushers around you, kill them. As a launcher branch, you should have a high reload and at least some shield regeneration, as well as penetration and damage. If you can hide behind your missiles, you can protect yourself from most semi-crushers, while dealing heavy damage to the boss. 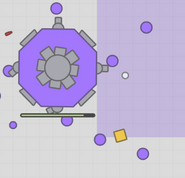 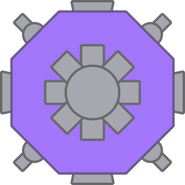