The Green Beta Pentagon is a large poisonous polygon. It can extremely rarely evolve from Green Pentagon, Beta Pentagon or spawn in pentagon nest.

The Green Beta Pentagon has the same shape as the regular Beta Pentagon, but the color is green. It also has a green aura around it, which indicates its poisonous abilities.

If a regular Beta Pentagon evolves, it has a one in 175 or 0.005 chance of turning green, instead of evolving into an Alpha Pentagon, so it is quite rarely seen. Green Beta Pentagon has 250 health and gives a lot of experience upon its destruction. Upon touching a player or AI, it will inflict poison effect for 15 seconds. 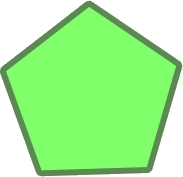 A transparent png of the green beta pentagon. 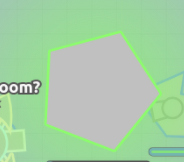 Closeup of a green beta pentagon with a custom theme

Closeup of a Green Beta Pentagon.
Community content is available under CC-BY-SA unless otherwise noted.
Advertisement