The Grower is a Tier 3 tank that upgrades from the Mini Grower and the Pounder at level 30.

The Grower upgrades from the

Mini Grower and the

The Grower can upgrade to the following:

The Grower and its branch were added as an experimental branch on September 29, 2018. It was removed and readded to the TESTBED Beta branch in the mean time, and it was officially made playable on January 18, 2020. 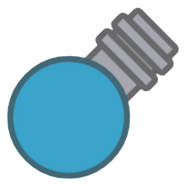 A high-res picture of the Grower.
Community content is available under CC-BY-SA unless otherwise noted.
Advertisement