The Gunship is a nest defender boss that was added on December 26, 2018.

Gunship has low speed and normal health for a boss, and high turn speed. Its Streamliner auto-turrets shoot very powerful yellow bullets, which have high speed, penetration, health, and damage. The penetration of Gunship's auto-turrets is higher than the penetration of any tank, even Splitter. Its traps are nearly useless, as they have low speed and health, but nevertheless lethal damage. They slightly protect the boss. Its destroyer turrets do not help the boss much, even though they fire very fast, strong bullets with high penetration and damage. Destroyer turrets main use is propelling the boss forward. Despite it looking like it can carry large squares it does not spawn Summoner upon defeat.

Despite having low speed and only three main turrets, Gunship can out-penetrate absolutely any tank. Its bullets can one-shot a glass-build level 60 tank, while they have the highest bullet speed of any nest defender. A few tanks, like Rainmaker branch, can out-penetrate a single turret, but not all the three. Trapper branch is also nearly useless when fighting against this boss due to the high bullet health. As such, only a few working ways of killing Gunship exist.

The first way requires the player to use a tank with a high DPS, like Rainmaker branch or Splitter. You should upgrade your movement speed as high as possible so that you can dodge bullets more effectively. When you will be fighting the Gunship, move in a left-right pattern to utilize its high turn speed. Because of its high turn speed, Gunship will miss most bullets, leaving only one auto-turret locked on you. Now, one Streamliner turret can be penetrated by some tanks. At this point, you should just slowly shoot Gunship while slightly retreating, and it will eventually die.

The second way of killing Gunship is attacking in groups or teams. One player will be distracting the Gunship, while another player will be dealing with damage. Destroyer turrets are pretty strong and can kill you in no time. It is advised to stay near the sides of the boss as its traps are very weak and can be easily penetrated, and the boss will fall fast.

Gunship fighting with a Splitter 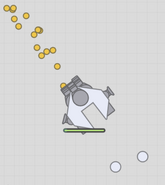 Gunship locked on someone

Gunship killing a group of bots in maze 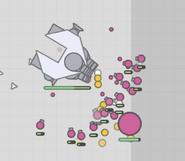