Heptadecimator is a boss that was added on June 1, 2019. Currently, it is on TESTBED bosses branch, mainly because of the fact of how blatantly OP it is.

Heptadecimator has INCREDIBLE firepower, capable of penetrating every bullet in a matter of seconds. No single tank can penetrate its heavy fire, as well as its drones. Its nailgun turrets are extremely strong, having as much penetration as maxed Minigunner each. Its spread turrets launch two types of bullets, secondary bullets, and main bullets. Secondary bullets have some spread and have lower health than main bullets. Main bullets, however, are very strong and accurate, having a lot of penetration and damage. Its basic auto-turrets are not very strong, as they deal with low damage. Still, they have a lot of health, and can easily kill minions or drones.

Its firepower is very strong, but it has even stronger ammunition in control. Drones of Heptadecimator respawn very quick, 15 drones total. Each drone has very high health and damage. One drone has 100 damage, capable of killing any glass-build tank less than in a second, but in return, drones have medium penetration.

Heptadecimator can perish/destroy any tank, even Coiffure, in a matter of seconds. No tank can cope with its incredible damage and penetration, and what's worse, it's bullet spread. You will be covered in bullets, and you will just be unable to defend yourself from incoming fire. It has mediocre body damage, as much as all normal bosses, but combined with its health still lethal. Its range is very high, as well as bullet speed, so all range attacks will not succeed. Heptadecimator moves slowly, but its drones are fast, faster than most normal tanks. Your only chance is to RUN AWAY AS FAR AS POSSIBLE.

But, running away is still a Nightmare. Bullets have fast speed, faster than most normal bullets, as well as critical damage. Drones are a nightmare, they are fast and are unstoppable. They are moving faster than you, and have a large range. If you are a Propeller branch, try to pick the right moment, and boost through bullets while avoiding all bigger bullets at all costs. Never rush near drones, as they are very deadly. Your best chance to run away from Heptadecimator is in the open, as bullets will not reflect from rocks, and spread may give you at least some possibility of escape. If you are close to drones or near rocks and in the bullet storm, you are screwed. Try to run away from Heptadecimator as soon as you see it close on the minimap or you see its bullets.

Killing Heptadecimator is a major challenge, far harder than Hexadecimator or Dropship (Boss). Firstly, never fight in solo, groups, or small teams. You will likely die. Try to bring at least 8 players with you, but even then they must be using right tanks, strategy, and be skilled. Firstly, you will need some mobile protection against drones and bullets, and rocks do not work because of bullet speed and the bullet spread. Drones are a huge problem, so you will need something even stronger as a shield. Firstly, drones commonly outflank tanks and have huge health. They do have a weakness, though - their medium penetration. This means that multiple Overlord tanks with high penetration can hold off the drones, so Overlord is more effective then Professor because of the number of drones, and higher penetration. Having four overlords protecting from drones, and two defending the bullets is ideal.This will create a strong shield, capable of neglecting the bullet storm, and area coverage will be sufficient. Have at least two tanks attacking Heptadecimator from the back of the shield, preferably Redistributor classes. No single tank can penetrate the heavy armor of Heptadecimator, but two likely will. Also, Heptadecimator has a strong Shield, so starter damage is required. If you manage to eliminate the shield, you may stand a chance against Heptadecimator. Finishing off Heptadecimator requires ideal team, strategy, and coordination from every attacking player. Although, do not forget about bots and other players, so have multiple players protecting your team.

VPN is not effective, as drones will absorb a lot of bullets, as well as the fact that shield of Heptadecimator is very strong. Multiple of them, approximately three will be required to kill Heptadecimator, but that is very unlikely.

An image of hurt, but still docile Heptadecimator 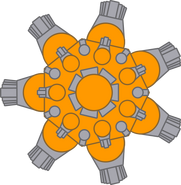 A high resolution image of Heptadecimator
Community content is available under CC-BY-SA unless otherwise noted.
Advertisement