The Heptahedron is a boss that was added on March 11, 2018. Currently, it is on the TESTBED bosses branch mainly due to how blatantly OP it is.

Heptahedron has a viking blue heptagon base with seven Smotherer auto-turrets in each corner, each having a gray base and a white circle in the middle. On each side of its base, Heptahedron has three width and short swarm drone launchers, where the middle one slightly stands out. Heptahedron also has seven quadral segments attached to each side. Each segment has three auto-turrets, each having a pale blue base, and the middle turret is behind the front two. The middle turret is Sprayer class, and the other two are Triplet turrets. On the sides of each quadral segment, Heptahedron has four Builder turrets.

Heptahedron has a large size and very low movement speed, but incredibly deadly ammunition. Smotherer bullets have high speed and penetration, and very high damage and health, and have high spread. Sprayer bullets have similar stats, but lower damage, health, and speed. Triplet turrets have mediocre penetration and health, small size but are fired at a fast rate, have a lot of speed and damage. Blocks of Heptahedron have a low range and speed, but very high health and penetration, and completely protect the boss from all angles. Heptahedron also spawns a lot of deadly swarm drones at a fast rate. These swarm drones have large size, medium speed, and damage, but high health for swarm drones.

Heptahedron can perish any tank, even Coiffure, in a matter of seconds. Although it is slower than a Mace, its bullets are stronger than bullets of any normal tank, have high speed, and can easily cover the player from 90-degree angles. Although its bullets will easily penetrate even tanks that create defensive barriers, the boss has an excellent defensive barrier on its own. Its blocks have very high health, launched at a medium rate, and will neglect incoming fire. Heptahedron also has deadly swarm drones, which have a very large range, medium speed, and damage. There can be a lot of swarm drones at once, so the initial wave of them will kill any tank easily. As such, whenever you see Heptahedron, your only chance is to run away. Heptahedron has a distinctive viking blue color, and whenever you see ammunition with such color it can only be Heptahedron. It is best to start running away when you see such ammunition, or else it will be too late.

Killing Heptahedron is a major challenge, far harder than killing any normal boss, Hexahedron, or most TESTBED bosses. Firstly, never fight alone, in small teams or groups of players. Try to get at least seven coordinated players which will be in a single team, or else you have little chances. You will not be able to outgun this boss in an open area, so getting a distraction is very important. You will need three Hexa Blasters to eliminate all the incoming swarm drones and bullets. Hexa blasters should be staying close to each other, and have two more Overlords, Professors, or Captains behind them. These two drone tanks should help the Hexa Blasters to neglect the incoming bullets. When the Heptahedron will be fully distracted, get two more Surges that should come closer to it and stun the boss. When the boss will be finally stunned, it will be vulnerable and can be killed. 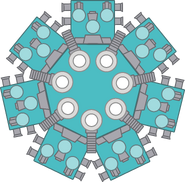 A high resolution image of Heptahedron

Heptahedron locked on a professor near red base
Community content is available under CC-BY-SA unless otherwise noted.
Advertisement