Hexadecagor is a boss that was added with the release of the game.

Hexadecagor's destroyer turrets shoots slow, but high damaging bullets. Bullets have high penetration, and can easily eliminate a group of drones. They have very high FoV, but a lower range.

Traps, surprisingly, are spawned if a player comes closer to the Hexadecagor, and will not start launching if the player is out of its FoV. Its FoV is less than destroyer's turrets FoV, so high-damage Sniper branch such as Aggressor can easily kill Hexadecagor.

Traps have very high penetration, health, and damage, similar to trapper Dominator's. Its bullets together deal a very high amount of damage, but all are automatic. This means only three can be locked on a single player. Ultimately, at medium range, Hexadecagor is like a combination between a destroyer and a trapper dominator. This is what makes it hard to combat at medium to close range. As such, avoid attacking it in solo on these ranges.

If you are caught near Hexadecagor, try to escape. In order to do this, focus on penetrating the closest dominator bullet. Although you will take some damage, you will have enough time to escape.

Because of the fact, Hexadecagor does not spawn traps if you are far away, tanks like Oscilloscope can only trigger its destroyer's bullets. Ideally, you will need a tank similar to Oscilloscope, with high damage, bullet speed, and movement speed. This will allow you to steadily deal decent damage to Hexadecagor, and eventually kill it. 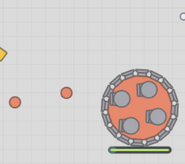 Hexadecagor attacking someone out of range of trap launchers 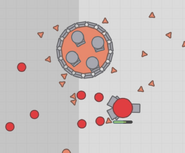 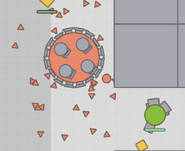 Hexadecagor and a shooting star in a maze 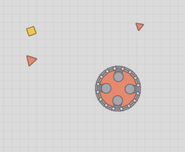 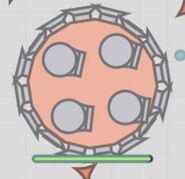