A Green Hexagon Has Evolved To A Omega Boss

Hexadecimator is a boss that was added on May 1, 2019. Currently, it is on TESTBED bosses branch, due to the fact of how blatantly OP it is. Boss has a stronger alternative, Heptadecimator.

Hexadecimator has INCREDIBLE firepower, capable of penetrating Redistributor in a matter of seconds. No single tank can penetrate its heavy fire. Its special turret behaves like an incredibly buffed Whirlwind. Its auto-twin turrets are very strong and can be barely penetrated by tanks like Minigunner. Its triplet turrets are very powerful, capable of killing the strongest Polygons within multiple seconds, have incredible speed and penetration. All of the bullets have very high health.

Hexadecimator can perish any tank, even Coiffure, less than in a second. It is faster than all slow tanks, and bullets come from many sides and have incredible health. Hexadecimator has a very large range, larger than Radiolocator's range and high bullet speed, proving all long-range attacks completely fruitless. It has high body damage, albeit slightly slower than rammer bosses, like Pulsar. As such, if you encounter Hexadecimator, you have only one option, RUN FOR YOUR LIFE.

But, even running away will nevertheless be problematic. Firstly, bullets have incredibly high speed, faster than almost any bullet in the game. If you are a Propeller branch, run away as soon as you see Hexadecimator. If you are Twin or Machine Gun branch, rocks are your only chance, if you are in a corner, however, you are screwed. You will not be able to run away from Hexadecimator in the open, so take advantage of its monstrous size by moving around the rocks. As a Pounder branch, if you do not have rocks closely, you are screwed. Simply put, the faster you are, the more chances you have to stay alive. If you are near base, get to your base at all costs. If you ran away, never ever come to Hexadecimator again. Try to avoid it.

Killing Hexadecimator is a major challenge, far harder than killing a Dropship. Firstly, never fight alone or in groups. Fight in teams, preferably 5+ players. Defeating this boss without a team is impossible. But even then, your team has to be extremely coordinated, skilled, and using the right tanks. Firstly, have at least three Necromancer branch tanks, focusing only on defense, not offense. Trappers can also be very effective for this task. Secondly, have some offensive tanks, like Redistributor, Overseer, or Necromancer branch tanks. They must focus only on offense. Defensive tanks should build an impenetrable shield that will protect the team, and offensive tanks should shoot behind from the defense. Hexadecimator, however, has incredible armor and shield defense. Dealing with the first 2-3% of damage will be the hardest. In order to do this, do not be afraid to sacrifice some health or a tank. If you manage to sacrifice a tank or most of your health for eliminating most of Hexadecimator's Shield, you will have some chance for the victory. Only coordinated, a skilled team with ideal tank combination and strategy can kill Hexadecimator. Do not forget about bots and other players, so you will need some players protecting your team.

VPN just does not stand a chance, since it will not be able to penetrate its armor and constant health regeneration. At least three VPN is required to kill Hexadecimator, which is very unlikely. Furthermore, Hexadecimator may lock on bots, accidentally killing on VPN, and slowing everything down. 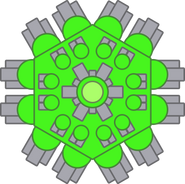 A high resolution image of Hexadecimator

Everything was wrong!!!!! THIS THING IS PLAYABLE!!
Community content is available under CC-BY-SA unless otherwise noted.
Advertisement