The Hexahedron is a boss that was added on October 14, 2018. Currently, it is on the TESTBED bosses branch due to the fact of how blatantly overpowered it is. It has a stronger alternative, Heptahedron.

Hexahedron has a large size and low movement speed, but very deadly bullets. Its smotherer turrets have very high bullet penetration and fast speed. They deal lethal damage that can kill any non-Smasher branch tank from a single hit, and have a fast rate of fire. Its other turrets have lower damage, but still high, and very fast bullet speed alongside with decent penetration. Each such bullet deals approximately 25% of health to the glass-build level 60 tank. Hexahedron always spins, and can only lock on a single player.

Hexahedron can perish any tank, even Coiffure in a matter of seconds. Although it is slower than a Mace, its bullets are enough strong to counter any normal tank. Its Smotherer turrets will penetrate the ammunition of any tank that creates a defensive barrier, like Tera Trapper or Kukri very fast. Its faster bullets are faster than any normal tank in the game, even 3-reload Shooting Star. As such, any tank will not be able to escape its bullets, and due to massive damage, it will die. If you want to escape Hexahedron, try to get behind a rock to protect yourself from incoming fire, and get away from Hexahedron as far as possible. If you do not have any obstacles around, you are usually screwed.

Killing Hexahedron is a major challenge, far harder than killing any other normal boss. Never fight alone or in groups, as you will die. Fight with at least 3 players, and using the appropriate strategy. Firstly, you will not be able to outgun this boss in open area, so luring it near obstacles is a must. Try to get a fast tank, like Shooting Star, and patiently wait until the boss locks on you. After it locked on you, always hide behind an obstacle and wait until it will slowly come near you. Then, have multiple more players attacking it from the back, preferably two Splitters, to deal very high damage. Attacking tanks should also hide behind the obstacles so that they will be invincible to the remaining turrets. This way, you have high chances of killing Hexahedron. 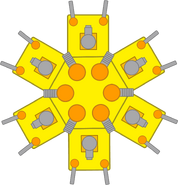 A high resolution image of Hexahedron
Community content is available under CC-BY-SA unless otherwise noted.
Advertisement