The Inceptioner was a Tier 2 tank upgrading from Basic at level 15. The main focus of its branch is the Bullets with auto-turrets.

The Inceptioner's creation is, like most Tier 2 Tanks, too old to be written in the changelogs, but we still can see the date when it was officially made Ingame. In the changelogs, we can see this information on the 06/15/2020 (June 15th). Exactly on the same patch, we can see that other tanks has been put in-game and branches off Inceptioner (like the Ceptionist) and some others that were already added, but now also branches off this tank (like the Tailgator). On the same day (but on a different patch), its bullet reload (the auto-turret) was nerfed by 20%. On 06/22/2020 (June 22nd), its bullet damage (the main one) was nerfed by 5% and a bug was fixed about the tank not shooting. You can see other information about the Inceptioner, but the information is mainly about other tanks that branches off it.

The Inceptioner has a circular body and a single frontal gun, like the Basic. Underneath it is a smaller Basic-like turret that does not fire. This represents its ability of the auto-turret on the bullets. The inner barrel does not fire anything, and can be thought of as attaching itself to bullets as they are fired, giving them a turret.

x1
The Inceptioner's bullets deal as much damage as a Basic's, but with slightly decreased reload. The Inceptioner fires bullets that have auto-turrets on them, firing weak bullets, and they can be used to overwhelm an opponent. This may beem like an Auto-Basic due to its weaker auto-turret and the main bullet with the Basic's stats.

The Inceptioner upgrades from the

The Inceptioner can upgrade to the following: 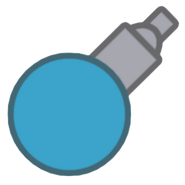 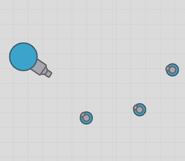 The Inceptioner firing its bullets.