The Incognito is a tier 4 tank that branches from Assassin.

The Incognito has a design similar to the Assassin, but with a black bar on top of the barrel.

The Incognito has high FOV and low reload. Its bullets travel quickly and deal significant damage. These stats are similar to the Assassin.

The Incognito's main perk is that all AI completely ignores it. This includes Bots, auto turrets, AI-controlled drones, even bosses. 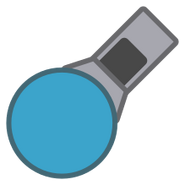