The Injector is a Tier 3 tank that upgrades from the Lancer at level 30.

The Injector has a hollow, circular body with a triangular lance in front and a plunger on its back.

Like the Lancer, the Injector has a lance that deals high damage to anything that touches it. This can also be used defensively to block enemy attacks.

The Injector has the ability to fill up its syringe and fire some bullet that poisons enemies or heals teammates it touches. This ability has a long refill time, but you can hold your charge for an indefinite amount of time.

The Injector upgrades from the

The Injector can upgrade to the following:

The Injector has very similar strategies to the Lancer. 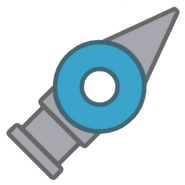 A high-res picture of the Injector.
Community content is available under CC-BY-SA unless otherwise noted.
Advertisement