Ingame
The Kasane is a tier 5 tank that upgrades from the Acid and the Triplet at level 60.

The Kasane has 3 long barrels arranged in the same way as the Triplet. On each barrel is a green bar signifying the Kasane’s ability (the Acid's poisonous bullets). The Kasane also has a faint green aura around it.

The Kasane has a slightly higher FoV than the Triplet, and has slightly higher bullet damage, penetration, health, and speed, with slightly less reload, like the Acid. The Kasane also shoots poisonous bullets, which continue to damage enemies even after the bullet has died.

Triplet. It does not upgrade any further. 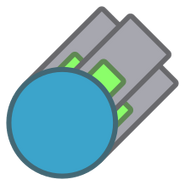 A high-res image of the Kasane.
Community content is available under CC-BY-SA unless otherwise noted.
Advertisement