The Kashmir is a Tier 5 tank that branches from the Rocket at level 60. It has the ability to fire part of its tank, similar to the

The Kashmir was added on 12 June 2020, and was nerfed silently the same day after its boosting bullets were found to be extremely overpowered, killing bosses and AI with ease and out-penetrating any tank. It was suggested 3 days earlier, and was added without going through a preliminary beta testing phase, as is common. It was nerfed again on 14 June. It was temporarily removed, and readded on 19 October 2020.

The Kashmir features a tank with a smasher turret on top and a smasher-based apparatus called a Regional. The Regional has two barrels, each firing powerful bullets at a high rate of speed with high recoil. The Regional can be launched at any time with right click.

The Kashmir upgrades from the

The Kashmir is a level 60 tank and cannot upgrade from any other tank. 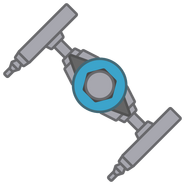 A high resolution image of Kashmir

A damaged Kashmir.
Community content is available under CC-BY-SA unless otherwise noted.
Advertisement