The LQM (stands for Legendary Quadral Machine) is a boss that was added secretly, no exact date is known. Currently, it is on the TESTBED bosses branch mainly because of the fact of how OP it is.

LQM has a low movement speed and low health, about as much health as Xyv Wdtcfgzsezgk. All bullets of LQM has very high speed and damage, and the boss has incredible firepower. Bullets fired from Quadral Machine and Triple Machine turrets are the strongest and have incredibly high health and penetration. Bullets from Twin Machine turrets have slightly lower speed and penetration, as well as lower damage. Bullets from machinist and basic auto-turrets have mediocre penetration, but high speed and damage. All bullets have high spread and can cover slightly more than 90 degrees. LQM also periodically shoots strong blocks that have a lot of health, range, and damage but low speed.

LQM has relatively low health, but unimaginably high firepower and penetration. Its bullets have a lot of speed and spread, making them nearly impossible to avoid. No single player can survive its attack unless the player is faster than bullets or is behind the rock. The first case is unlikely since only Shooting Star and Kashmir and Rammer out of the 1900 tanks will be faster than bullets, and the player will need to get out of the boss's range as fast as possible. Another problem in countering LQM is that its Triple Machine turrets are very strong, and can lock on different players. Since these turrets can penetrate bullets of any normal tank, distracting and killing LQM is not an option.

There are very few ways of killing LQM, yet they exist. The first, and unquestionably most effective way of killing LQM is by using VPN. LQM will not even target you, and chances that LQM will start firing in your direction are low enough for you to kill it in time. With maximum bullet build, you can kill LQM relatively quickly and safely.

Another way of killing LQM, which is far more luck-based, is by using two Surges and a tank with high DPS. Surges should wait until LQM will be distracted and not firing in their direction, and then stun it with their special ability. If both surges will only be using special abilities with maximum reload, they will be able to completely stun LQM. In the meanwhile, another tank can finish it off. 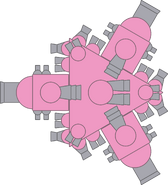 A high resolution image of LQM
Community content is available under CC-BY-SA unless otherwise noted.
Advertisement