In-game
The Lancer is a Tier 2 Tank upgrading from the Basic at level 15. The main focus of its branch is lances instead of barrels/bullets.

The Lancer's body is circular and does not have a gun. Instead, it has a triangular blade in front. This is used to damage polygons and tanks.

Lance Stats
(compared with the Basic)

x1
The Lancer's lance is really a gun with a very high rate of fire and very short range. This means enemies who are within range of the lance will take heavy damage at a fast pace. This also extends to any enemy bullets, drones, and traps that are in range of the lance.

The Lancer's gun stats are very different from the Basic since they use different mechanics. Its lance's stats compared to the Basic are provided for reference.

The Lancer upgrades from the

The Lancer can upgrade to the following:

A Lancer with low health

A Lancer killing a Alpha Hexagon

A Lancer at half health 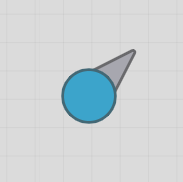 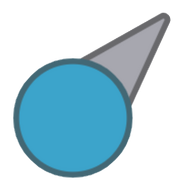 A high resolution image of Lancer

The Switcheroo in its Lancer form
日本語
Community content is available under CC-BY-SA unless otherwise noted.
Advertisement