The Launcher is a Tier 3 tank that upgrades from the Pounder at level 30.

The Launcher has a circular body and a large gun in front. It has a smaller expanding barrel inside that gun.

Instead of bullets, the Launcher fires missiles that act like bullets with a gun on their back. This gun fires while the bullet is traveling, creating a trail of damaging bullets behind it.

The Launcher's missile is relatively strong and durable, but has a slow rate of fire. Its missile's bullets are weak and small, but can deal a small amount of damage to enemies that run into them.

The Launcher upgrades from the

The Launcher can upgrade to the following:

The Launcher was suggested by moouse and added to the game on July 25, 2018 alongside the Bumper. 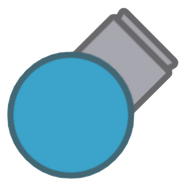 A high-res picture of the Launcher.
Community content is available under CC-BY-SA unless otherwise noted.
Advertisement