Ingame
The Led Zeppelin is a tier 5 tank that upgrades from the Zeppelin and the Slasher at level 60.

The Zeppelin form is essentially just a Zeppelin with two small Subduer guns at the front, but unlike other Zeppelins, the Zeppelin bullet does not explode. The Aegis form has a lance in front. Like all other lance classes, this lance is made up of a fast-firing short-range gun. There are also two extra barrels, which look like the Subduer's. Finally, at the back, there are three "pushers" that push shapes, sancturaries, players, and bosses without taking or giving damage.

Slasher. It does not upgrade any further

As the Led Zeppelin

Against the Led Zeppelin 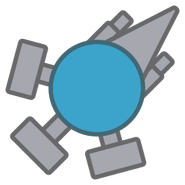 The Led Zeppelin on its Aegis form 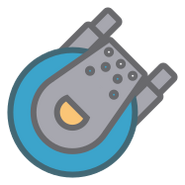 The Led Zeppeling on its Zeppelin form 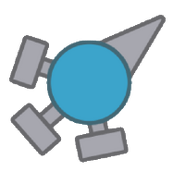 The Aegis image, used to compare the Aegis and the Aegis Zeppelin
Community content is available under CC-BY-SA unless otherwise noted.
Advertisement