The Legendary Crasher is a Boss that is on the TESTBED Bosses Branch mainly due to the fact of how OP it is. Its exact date it was added is unknown.

The Legendary Crasher is a big crasher with normal pink colors, mainly using Bullets as its focus. It has 2 Assassin turrets onto the sides of it. At the edges of the triangle, there is a Twin Builder at each edge. At the end, there are 3 machine guns, one of them is slightly longer than the other 2 Machine Guns. It uses it to propel forward and pursuit the enemy.

Legendary Crasher has HIGH firepower, due to its Hunter turrets on the front. In the other edges, there are two Quadruplet-like barrels in the two sides. Avoid the Quadruplet barrels because you'll get sideswiped if you ram into too much bullets. Avoid the machine gun barrels, too, or you will get locked on and you are basically dead for sure unless you run by fleeing. However, do not fight it unless you are in a group. Lowering its health with Drones is ideal, while Bullet Spammers protect the drones by shooting it.

Currently does not spawn. Expect a Senior Tester to use the create entity command and spawn it.

It is best to go in groups because you'll have high firepower and DPS. Using Surges and Hexa Builder will help.

Using some of your tanks, you will need at least 6 or 5 Hexa Builders to fend off at least some of the bullets temporarily. This will make a camp full of blocks and protection to fend off these kinds of bosses. This would kill tanks, even Rammers, in a matter of moments. It is advised to get a firing tank, at least Torrent, and most likely the Optic branch. This would help it fall faster. This can defeat the Legendary Crasher, as if you survive, at least. 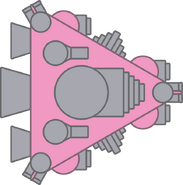 This is also the Main Antagonist of DefBt.io.