Blue (Purple, depending on your theme)

Leviathan has low health and speed and always spins. Its extinctionist turret fires fast bullets that have lethal damage, high speed, and health at a medium rate. Its auto-turrets have medium damage and bullet speed, and mediocre rate of fire. Leviathan also spawns up to 30 Crashers at a fast rate.

It is said that the First Alpha Pentagon corrupted for an unknown reason. It makes total sense; the base is essentially a trimmed down Alpha Pentagon.

Can spawn by randomizer or when Pentagon Sanctuary dies.

Leviathan has very high firepower and DPS, and crashers will easily outflank you and deal high damage. You will also be limited by its bullets, and unlikely be able to dodge both bullets and crashers. As such, most tanks will not stand a chance against Leviathan, and will not be able to kill it before they will die. As such, whenever you see that Leviathan locked on you it is advised to run.

One of counters to Leviathan is Underseer branch. Firstly, you should get as much sunchips as possible, and pick a glass-build nearly maximizing sunchips stats. Then, wait until Leviathan will be distracted and charge all your sunchips in it. This way, you will be able to easily kill it from one blow. The Elamficitor branch can do this even without distraction by just going invisible. Splitter can also work but requires some skill and multiple charges. However, you must ensure Leviathan is damaged, is not locked on you and you have max sunchips.

Another way of killing Leviathan is just by waiting until it will get distracted and shooting it. In this way, you should only attack Leviathan when it is distracted and retreat quickly if it locked on you to get out of its range. This works ideally with teammates, as they will focus only on Leviathan and you will be able to kill it. Due to its low health, VPN will also work fine. 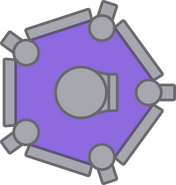 A high resolution image of Leviathan

Galileo, The Fallen Auto Tank and Alastor, The Egg King 2 seen with Pewdiepie, The Leviathan

A leviathan with 1mil in boss rush

Leviathan with alot of Pink crashers