In-game
The Minigun is a Tier 3 Tank that upgrades from the Machine Gun, the Sniper and the upcoming Uzi at level 30.

The Minigun has a circular base and three stacked barrels, each longer than the one above it.

x1
Its three guns fire weaker and smaller bullets than the Sniper or the Basic but has a much higher rate of fire, and its bullets are very fast. The Minigun also has very little spread and works like a lower tier Streamliner.

The Minigun upgrades from the

Machine Gun and the

The Minigun can upgrade to the following: 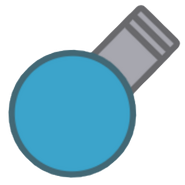 A high-res picture of the Minigun.
Community content is available under CC-BY-SA unless otherwise noted.
Advertisement