The Motor is a Tier 3 Tank that upgrades from the Director and the Inceptioner at level 30. The main focus of its branch is Drones with auto turrets.

The Motor has a circular body with a drone spawner in front. It also has a grey square on top of its body that signifies its main ability.

The Motor is a drone tank that controls drones. Unlike most other drone tanks, though, its drones have auto turrets on them that fire at nearby enemies.

The bullets from its drones' auto turrets are small, quick, and low-damage. The Motor's drones themselves are average in speed and power.

It can control a maximum of 5 drones and has an increased FoV, like other drone tanks.

The Motor upgrades from the

The Motor can upgrade to the following:

The Motor was suggested by Fillygroove and added to the game on January 16, 2019. 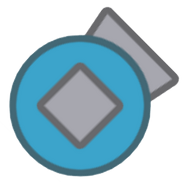 A high-res picture of the Motor.

The Motor's Auto-Drone.
Community content is available under CC-BY-SA unless otherwise noted.
Advertisement