The Multishot is a Tier 3 tank that upgrades from the

The Multishot has a circular body and a wide gun with a shorter and slanted base. It approximately looks like

Pounder, the Multishot shoots a number of weaker ones. It fires very inaccurately but can be quite destructive at close range. This can be useful because expanding shield of bullets might destroy or decrease health of bullet fired by other tanks trying to kill Multishot.

The Multishot has a slow reload speed while its shots travel very fast.

The Multishot upgrades from the

The Multishot can upgrade to the following:B

The Multishot was suggested by moouse and officially added to the game on July 29, 2018 alongside the Buckshot and Overpowerer. 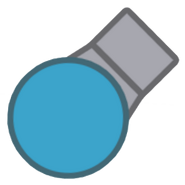 A high-res picture of the Multishot.
Community content is available under CC-BY-SA unless otherwise noted.
Advertisement