The naidrauG is a boss that appeared on TESTBED Bosses branch. It is in there because the fact of how OP it is.

naidrauG has a pink triangle appearance and a Xyv Wdtcfgzsezgk drone turret spawner in the middle.

The boss has high firepower due to the fact of how the Xyv barrel's firepower that can shred almost anything, in a matter of moments. You will not be able to defeat this boss in solo, as you can only fight it in teams. FFA gamemode is not a good idea due the the fact that everyone will be your enemy, and a lot of players cross firing at you will be enough to make you die.

You will have to circle the boss because the drones will go somewhere else where you are moving and you can use that up to your advantage and kill it eventually. 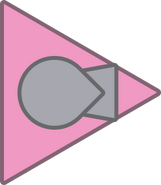 a high res picture of naidrauG
Community content is available under CC-BY-SA unless otherwise noted.
Advertisement