Nailer has a yellow square base with a

Triplet turret on top. The Nailer has four trap launchers on each side of the square, and four twin auto-turrets are positioned on each corner.

The Nailer has a powerful triplet turret that gives it decent penetration. The Nailer also has 4 auto twin turrets that fire at the closest player. The Triplet Turret and Twin Turrets give it excellent bullet penetration, and the Nailer constantly spawns traps around itself. In addition, the trap launchers have a chance to shoot out a Minion instead of a trap. Minions look like small, yellow twins that continuously fire at the player. Although their damage is low, they can kill players fairly quickly if the player doesn't target them.

This makes a Nailer a powerful boss which is a major challenge to be defeated in solo.

Nailer has high combined bullet penetration and damage, allowing it to kill a player without high-penetration very quickly. Its traps cannot allow players to get close, and do incredibly high damage to anyone who touches them. Nailer also has a lot of health. The main problem is that the Nailer can spawn twin minions, which can easily kill an unaware player. Octo-tank branches do not have enough firepower to penetrate the defense of the Nailer. Twin minions will circle around the nailer if there are no tanks nearby, which means that a VPN cannot defeat a Nailer. This means that it is incredibly hard to defeat a Nailer solo.

Fight in groups of at least three players. One player will fight back against minions and triplet turret, while another one will penetrate its bullets and traps. The third player should deal the damage to the boss. Even then it would require excellent coordination to defeat the Nailer.

Nailer has decent speed, so do not choose very slow tanks. If, however, you want to finish off nailer in solo, minions and many drones are your only chance. Pick a glass-build colony branch ( only if skilled ), or minion branches like splitters (also, only if you are skilled enough in the coordination of many minions). 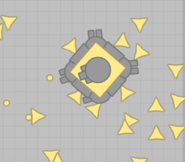 Nailer locked on someone, with diep color theme 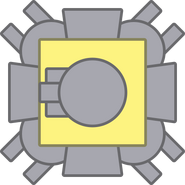 A high resolution image of Nailer 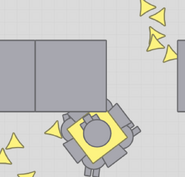 Nailer locked on someone in maze
Community content is available under CC-BY-SA unless otherwise noted.
Advertisement