Octogeddon is a boss that was added with the release of the game.

Octogeddon has an orange octagon base with three destroyer dominator's bullets on top. On each side of the base resides auto-trap launcher.

Octogeddon constantly fires the dominator's bullets on the closest player. Also, the bullets are slow, they deal heavy damage to the player.

Octogeddon also launches small traps on the closest players, and kill unaware player very fast. Traps take some time to penetrate, but their health is lower than normal traps.

Although the damage of Octogeddon is pretty high, bullets and traps are slow. Moving is key: you can quickly attack the Octogeddon from its vulnerable sides that do not contain traps yet. Still, however, Octogeddon has a lot of health. At some point, it will be protected from all sides with traps, and regenerate most of the lost health. Bullet spammers may sometimes be effective, but there are better ways to defeat the Octogeddon.

Tanks that control drones, minions, or Redistributor are ideal at killing this boss. All you need to do is to stay away for some seconds and then charge your minions/drones/bullet at the Octogeddon. It will take some damage, so move away and repeat the procedure. This is one of the fastest ways of killing Octogeddon since its projectiles will be useless. 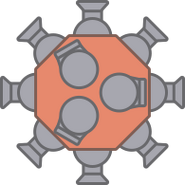 A high resolution image of Octogeddon 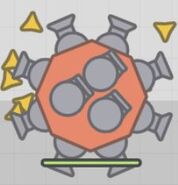