The Overlord is a Tier 4 tank that upgrades from the Overseer at level 45.

The Overlord has a circular body with 4 trapezoidal drone spawners. It is quite recognizable and is a symbol of Diep.io.

Like the Overseer, it can have 8 drones, which have moderate damage and penetration. However, the Overlord can get these 8 drones faster than Overseer can. It also gains a bit of FOV.

The Overlord upgrades from the Overseer. It can upgrade into the following: 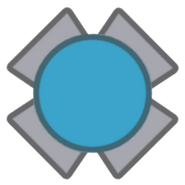 The Overlord, but from diep!
Community content is available under CC-BY-SA unless otherwise noted.
Advertisement