The Overluxe is a Tier 5 tank that upgrades from the Basebrid and the Overlord at level 60.

The Overluxe has a circular body with an average-size, Basic gun in front as well as four drone spawners on its back.

Like the Basebrid, the Overluxe fires average-power bullets from its front gun. Its bullets are comparable to the Basic in firepower.

Its drone spawners spawn uncontrollable drones that automatically chase and attack nearby objects. Unlike most other Hybrid Tanks, the Overluxe can uniquely spawn up to a maximum of ten AI drones.

The Overluxe upgrades from the

The Overluxe is a level 60 tank and cannot upgrade to any other tank. 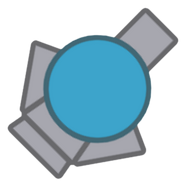 A high-res picture of the Overluxe.
Community content is available under CC-BY-SA unless otherwise noted.
Advertisement