The Overseer is a Tier 3 tank that can control 8 drones. It upgrades from the Director at level 30.

The Overseer has a circular body and two spawners positioned 180 degrees apart on each of its sides.

The Overseer is a drone tank, like the Director, meaning it controls drones instead of shooting bullets.

Holding the fire button (or enabling autofire) will make your drones follow your mouse cursor. While not otherwise in action, drones circle their owner until an enemy or shapes come close enough to trigger the automatic defense that drones provide.

It can control a maximum of 8 drones. The Overseer's drones are average in size and power.

The Overseer upgrades from the

The Overseer can upgrade to the following:

The Overseer is a very powerful tank if used correctly, but its poor reload can often render it defenseless if it makes a mistake.

The Overseer's poor reload makes it vulnerable whilst refreshing its drones. 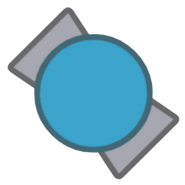 A high-res picture of the Overseer.
Community content is available under CC-BY-SA unless otherwise noted.
Advertisement