The PDK-175000 is a TESTBED boss that was added on an unknown date. It is on the TESTBED bosses branch because of how balantly OP it is.

The PDK-175000 has a hexagonal base with six more rectangles branching into six more squares. It has 12 smotherer turrets in the center. It has a hexagonal turret which has six turrets on each edge of the hexagon, it also has four assassin turrets on the upper edge of the square branching off of the rectangle which holds them. There are two sunchip spawners with only one spawner instead of two but they spawn in auto sunchips. PDK-175000 also contains constructors to defend it, as well as septa-trappers making it have an incredible defense. It includes annihilator turrets for well annihilating of course. PDK-175000 also spawns in minions but we don't know what they are so they will so far be normal minions. On each rectangle branch there is a single turret and two minion spawners as mentioned before, we don't know what it spawns. On each square that the rectangles branches into, there in the lower portion are five gunner turrets.

The PDK-175000 has alot of firepower including defense. It has a special kind of sunchip spawner called the Necrodrive, which is a normal Underseer but instead it's sunchips have turrets on them, but they are just a single spawner instead of two spawners. It has a custom turret which has six turrets and has a hexagonal base for the turret, there is not an auto-6 so that is why it is so special also the PDK-175000 is the only boss to have these turrets. The smotherer turrets are the smallest turrets as well but having very high DPS, higher than the normal streamliner. It has spawner turrets which only very few bosses have as well.

If it did spawn Woomy Arras io would definetely not exist. (Because a mass amount of barrels same as the EK-6 lol)

You will need a lot of defense and offense. About 12-16 Hexa-Builders and 10-13 Tri-Constructers are about enough to block atleast a major amount of it's bullets. But if you are one make sure to put auto spin and auto fire. You will need many Surges such as 5-8 of them are enough to freeze some of it's bullets and slow it's DPS. You will probably need 7-9 sniper class to snipe it, but if you are one try to dodge the assassin bullets. You will probably need shield destroyers such as bullet spammers, Melter seems decent at doing it. Atleast 5 coursers are enough to break the blocks. Though, this does seem enough but well... IT IS NOT! You will need multiple Cyclones or Monsoons to fend off many bullets. Skimmers for killing minions and dealing extra damage. Splitters to break it's shield stopping it from regenerating. Even MORE builder class to path your team. 6-9 kukris to shield the builder classes from minions and bullets, and that's not it... You need Necromancers to spread their sunchips around to break most bullets. Swaggers for extra damage. Ceptionist branch to break most bullets, blocks and traps. Hexa-Blasters to break annihilator bullets. Many planter branch to atleast fend off the bullet spam of the smotherers. Spawner class to attack it and break bullets. Finally surgeons to destroy turret bullets. Extra defense by either Coiffures or Giga Smashers acting as a meat shield, make sure they have lots of health and regeneration. This may be enough, but maybe not so here's the optional part in the next paragraph.

***Please note that these are all optional, you will probably not have to use for killing this boss.***

8-12 octo tanks for defense and carrying on nearer to the boss to deal more damage. High RoF and DPS tanks like the gatling gun class for fending off minions and sunchips. Oscilloscope class for sniping and dealing damage. At least 5 Redistributors to shred it's bullets and health. 6-as many as you want furnaces to shield off the entire team from dying. Functionists for extra damage and defense. Dealers or Powerhouses for defense and damage. Oh wait a minute... We didn't need all that I noticed... We could have just did a bunch of overrides, surges and offensive tanks to kill the boss... Well anyway were talking about HARDCORE which is nothing to distract the turrets and no misc, anyway lets continue on. Grower class for defense. Paralyzers to freeze the boss to pretty much stun it. 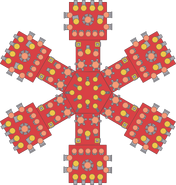 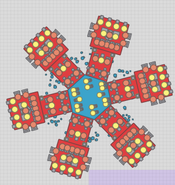 The body of PDK-175000 in ftb
Community content is available under CC-BY-SA unless otherwise noted.
Advertisement