The Paralyzer is a Tier 5 tank that upgrades from the Freezer and the Nitrogen at level 60.

The Paralyzer has the same barrel shape as the Assassin, but it has a yellow rectangle above the trapezoid part.

The Paralyzer has just about the same reload of the Assassin, except it has one of the most powerful effects: Paralysis

Paralysis temporarily stops your victim from moving for a short amount of time.

The Paralyzer upgrades from the 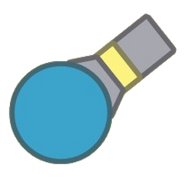 A high-res image of the Paralyzer
Community content is available under CC-BY-SA unless otherwise noted.
Advertisement