Pelleter Pellet (x2)
The Pelleter is a Tier 2 Tank that upgrades from the Basic at level 15. The main focus of its branch is shooting small, weak, speedy and high-reloaded bullets, named pellets (hence its name and due to the Gunner firing the same bullets [and the Gunner bullets' name {Pellets} were mentioned in a diep.io achievement]).

The Pelleter has a circular body and two small guns supported with a short base.

x1.2
The Pelleter's most notable feature is its small bullets, which slip through bullets and enemies easier thanks to their higher health, penetration, and resistance. However, they deal much less damage. The Pelleter's two guns also gives it a higher rate of fire than the Basic.

The Pelleter upgrades from the

The Pelleter can upgrade to the following: 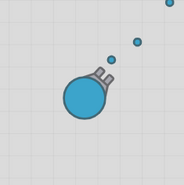 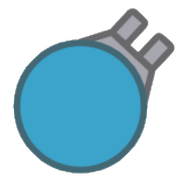 A high-res picture of the Pelleter.
日本語
Community content is available under CC-BY-SA unless otherwise noted.
Advertisement