Ingame
The Penta Shot, sometimes known as the Penta, is a tier 4 tank with five barrels that branches off the Triple Shot and the Harasser at level 45.

The Penta Shot exists in Diep.io and Arras.io, and was in the original Woomy. It has not been changed, though numerous tanks have been made that branch from it.

The design of the Penta Shot is much like Arras' or Diep's Penta Shot. It has five barrels, with the central barrel being the longest and the side barrels being the shortest. The barrels fan out in a 60-degree sweep.

The Penta Shot has moderate recoil from it five guns, and can be used effectively as a rammer. The bullets are able to do powerful damage and the bullet sweep can stop most drone-based frontal attacks. you should go to diep.io fandom to search for more information.

The Penta Shot upgrades from the

Triple Shot and the

The Penta Shot upgrades into the following level 60 tanks:

The Penta shot is the bane of the overlord due to the angle of its guns and the amount of bullets. 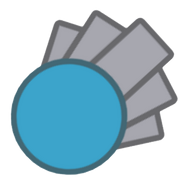 A high-res picture of the Penta Shot.
Community content is available under CC-BY-SA unless otherwise noted.
Advertisement