Ingame
The Pentamancer is a Tier 5 tank that upgrades from

The Pentamancer is a Pentagon with a drone spawner on each side. Its drones are known as "Tortillas" and they are shaped like Pentagons.

The Pentamancer has drones similar to those of

Eggmancer, because they infect and control any pentagons which they touch except Beta pentagons and above.

The Pentamancer upgrades from the

Necromancer at level 60. It does not upgrade any further, as it is Tier 5. 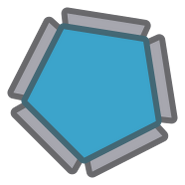