Probationer Drone (x5)
The Probationer is a Tier 3 Tank that upgrades from the Director and the Pounder at level 30.

The Probationer has a circular body with a single, large drone spawner at its front.

The Probationer is a drone tank that controls drones instead of firing bullets. As signified by its larger drone spawner, its drones are larger than normal Director drones, slightly slower, and much more powerful.

It can control a maximum of 5 drones and has an increased FoV, like other drone tanks.

The Probationer upgrades from the

The Probationer can upgrade to the following: 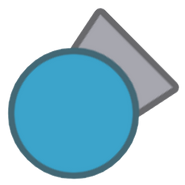 A high-res picture of the Probationer.
Community content is available under CC-BY-SA unless otherwise noted.
Advertisement