Pulsar has a purple hexagon base which is based on a Semi-Swarm Crusher. Behind it has a Skimmer cannon.

Pulsar has a lot of health, launches Skimmer missiles, and has deadly body damage. It moves at a low speed.

Pulsar is intended to be a rammer, but in fact it is not very deadly. This is mainly because of its incredibly low speed - Pulsar is one of the slowest bosses in the game. This counters the fact its main weapon is body damage. Its missiles are very strong, but they have low speed and always come from the back of the boss, which means they cannot hit players to whom Pulsar is locked.

This makes Pulsar an easy boss to fight, but you must still pay attention. The key is just staying away from it, and not letting it come close. Always keep a distance from the boss. When there are other players around, be careful. Pulsar has a lot of health, and you may be distracted. At this point, you may be vulnerable to players. If a player attacks you, always prioritize it above the Pulsar, almost any tank is deadlier than this boss. If you are attacking it in groups, and you want to kill it, do not be afraid to ram it when it is low on health. 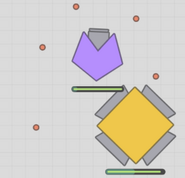 Too bad I can't play ping pong with you.