Reanimated Farmer is a boss that was added with the release of the game.

Reanimated Farmer has a black circle base, with a Sealer turret in front, and drone launcher on the back.

Reanimated Farmer's drones are not very strong: they have low speed and relatively low health. Despite this, they do a lot of damage, and two drones are enough to kill level 60 glass. Drones always lock on the closest player with the highest danger value.

The main ammunition of the boss is the bullets. They are fast, deal a lot of damage, and have medium-high penetration, but in return medium health. Can only target one player, until that player is dead or out of its FoV.

Reanimated Farmer has incredible bullet speed and penetration, meaning that minions will fall apart to pieces, while drones can only be used for defence. There are a lot of bullets released, making it hard to continuously damage Reanimated Farmer, as most of your bullets will be penetrated with Reanimated Farmer bullets. It moves with low speed to ram into traps, so most tanks just cannot defeat Reanimated Farmer in solo.

Since Reanimated Farmer can lock on only one player, attacking it while it is distracted is very effective. It will likely switch to some bot, and at this point, it will be vulnerable. Drones are not a large problem because of their low health.

The ideal tank that can kill Reanimated Farmer is Macheptionist. Some of the projectiles will deal constant damage to the Reanimated Farmer, while others will penetrate its heavy focused fire. You will deal low damage if it focuses on you, and higher damage if distracts on another player.

Another way to kill it is in teams. Use two Overrides with high drone speed and reload to distract the farmer and the drones. Then use a destroyer branch tank to finish it off.

Reanimated Farmer locked on someone 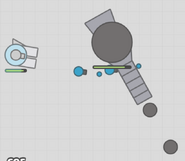 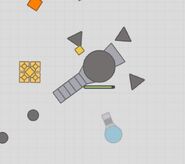