Reanimated Uzi is a boss that was added with the release of the game.

Reanimated Uzi has a black circle base, with two rapid-fire cannons in front.

Reanimated Uzi has only one type of bullet, but they are very strong. They have fast speed, penetration, and health. They come in bursts, so it is possible to damage Reanimated Uzi while it is not firing.

Minions, traps, and drones are the least effective weapons against this tank. Minions will just get penetrated by two fast bullets, Drones just do not have enough time to deal enough damage to the Reanimated Uzi, and Traps just will be penetrated, and deal low damage.

Bullet spammers, especially Recruit branch with some spread and low bullet speed stand a good chance in the open: one powerful bullet in the center will penetrate Reanimated Uzi bullets, and other bullets will be dealing some damage. You can also utilize the fact Reanimated Uzi will sometimes distract on other players, and you will be able to deal heavy damage to it.

An even better way of killing Reanimated Uzi is to lure it into a rock and start circling it around it. In order to do this, you will need a tank with high movement speed, and high bullet speed and penetration. Each time Reanimated Uzi comes closer near a rock, shoot it, retreat and repeat. This works with Destroyer branch, minions, drones, and traps most effectively.

Reanimated Uzi attacking a bot in a maze near a flangle 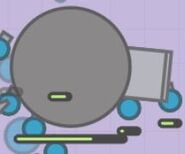