The Revolutionist is a Tier 3 tank that upgrades from the Auto-2 and the Auto-Basic at level 30.

The Revolutionist has a circular body and a regular sized gun in front. It also has a ring attached to its body with two turrets on opposite sides, each with a single gun.

The Revolutionist's main gun fires bullets at a moderate pace that have average penetration and damage, near identically to the Basic.

The ring, or base, of the Revolutionist automatically spins, bringing its auto turrets around the tank. Its turrets will automatically fire on nearby enemies, just like other tanks' auto turrets. They fire fast bullets that deal moderate damage at a fast pace.

The Revolutionist upgrades from the

The Revolutionist can upgrade to the following:

The Revolutionist was added as a TESTBED tank at an unknown time and was later made playable on June 1, 2019. 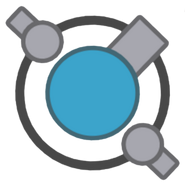 A high-res picture of the Revolutionist.
Community content is available under CC-BY-SA unless otherwise noted.
Advertisement