The Rifle is a Tier 3 tank that upgrades from the Sniper at level 30.

The Rifle has a circular body with a long gun on its front. It has another barrel underneath it that is slightly shorter and wider.

x1
The bullets of the Rifle are slightly smaller than the Sniper's but are fired at a much faster rate, somewhat close to a basic's fire rate. Its bullets' damage and health are also lower than that of the Sniper.

The Rifle upgrades from the

The Rifle can upgrade to the following: 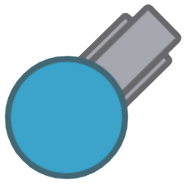 A high-res picture of the Rifle.
Community content is available under CC-BY-SA unless otherwise noted.
Advertisement