In-game
The Ripple is a tier 5 tank that upgrades from the Surfer.

The Ripple's front barrel shoots bullets similar to the Surfer's front bullets, whilst the drone spawners and back thrusters function as smaller versions of the Surfer's thrusters.

Due to the Ripple's small size, it can move faster than most tanks.

The Ripple upgrades from the

As the Ripple is a tier 5 tank, it doesn't upgrade any further. 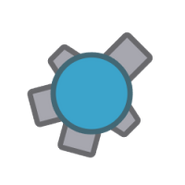 The Ripple with transparent background.
Community content is available under CC-BY-SA unless otherwise noted.
Advertisement